Dispatch from the "infill-housing opportunities" project 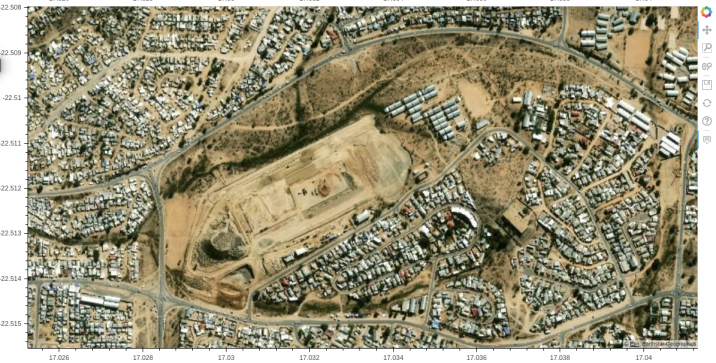 This article is a dispatch from the "Infill  Houdin Opportunities" project led byPhillip Luhl and collaborators from NUST, University of Chicago, and Arizona State University. Read more about the project HERE.

Namibia’s urban land and housing crisis is most clearly characterized by the ca. 70 percent of urban citizens who live in informal structures and/or settlements across the country.  The majority of Namibians are priced out of the available commercial housing options. Even public sector workers like teachers and nurses, considered as a middle-income group, are often excluded from the market. In the absence of sustainable and equitable social housing opportunities for those with lower and irregular incomes such as domestic workers, or informal workers, formal home ownership may never materialize .

Contemporary  town planning approaches still maintain the apartheid city structure, with the low income housing far from the city center. The identification of open spaces in Windhoek, could lead to mixed housing opportunities. The 2018 National Land Conference established urban land as one of the main pillars of land reform, and Resolution 29 calls for “unused land available in the local authority (LA) to be considered for expropriation” in order to make it available for affordable housing. In Windhoek, large portions of such seemingly underutilized land is publicly-owned either by the central government or the Municipality of Windhoek. Such land is often reserved for future development, as “public open space” or “undetermined” and includes the vast tracts of land adjacent to dry riverbeds throughout the city in already established neighbourhoods. As public open space for recreation, these portions of land  are hardly ever accessed due to fear of crime. As a result, they remain underutilized and hold great potential for realizing affordable mixed-social housing opportunities within the built-up area of the city.

The goal of our project is to identify these potential spaces, at scale, across the city. Computationally identifying target sites allows us to harness the power of data science and do this identification at scale to inform on-the-ground human verification. Therefore, using a combination of algorithmic and human assessment, we explore the evidence base for a concrete policy proposal for the realisation of urban-infill social housing opportunities on currently under-utilized publicly-owned land in Windhoek. Using a dataset of building footprints and street networks of the City of Windhoek from OpenStreetMap we seek to identify land across the city that falls within our criteria of underutilization.

Be within the Municipal boundaries of the city of Windhoek

Be surrounded by existing build up and serviced land parcels i.e proximity to existing bulk infrastructure.

As we refine proposals for mixed-density housing options, including  4 storey walk-ups in conjunction with construction costs, we are also looking to refine the size of a viable minimum land parcel.

By weighing these criteria we aim to identify parcels that have sufficient available space while still being comparatively amenable to integrate into existing infrastructure. The computational model https://github.com/CooperNederhood/namib_landuse  is built upon infrastructure that was developed in the Million Neighbourhoods Map.

Developed by researchers at the Mansueto Institute for Urban Innovation at the University of Chicago (Soman et al 2020), the Million Neighbourhoods Map uses OpenStreetMap data to identify underserviced neighbourhood blocks across the Global South (see: www.millionneighborhoods.org). It uses building access to existing street network infrastructure as a proxy to highlight which city-blocks in the city could benefit from expanded connection to the street network infrastructure to improve access to services like water and sanitation. Rather than using the Million Neighbourhoods Map to identify under-serviced city-blocks, we are using it here as a first pass to identify well connected city-blocks to fulfill our third criteria of proximity to existing bulk services infrastructure.

Data availability and access remains a significant stumbling block in developing accurate computational models in developing cities. This is especially true for models that rely on openly available spatial data such as ours. The availability of validated OpenStreetMap for building footprints and street networks in Windhoek posed the first significant data stumbling block for our project. Partnering with the Guardians of the Map Initiative of the Shack Dwellers Federation of Namibia, Namibia Housing Action Group and the Department of Land and Property Sciences  at NUST, and the Tobler Society YouthMappers Chapter at the University of Chicago, we successfully applied for a Community Impact Microgrant to the value of USD 5000 (+/- N$ 75 000) from the Humanitarian OpenStreetMap Team (HOTOSM). Over the course of the next 6 months this project will not only build the capacity of members of the CLIP Team to contribute high quality spatial data for informal settlements in Namibia, but will also increase the visibility of, and availability and high-quality open spatial data for all neighbourhoods in the City of Windhoek. Additional key data for the process include topographical, municipal zoning and cadastre data. We are currently in the process of sourcing these from the City of Windhoek and other sources.

Co-investigator Jennilee Kohima, assigned second year town planning students to utilize data available from the city of Windhoek’s enlighten data site and field work to assess the suitability of manually identified parcels of land within the City that would meet our criteria for parcels suitable for developing infill-housing. The dual purpose of this assignment was to create a research opportunity for students and incorporate their on-the-ground experience and observations into the methodology that will inform the final computational model. Three neighbourhoods, Windhoek West, Windhoek North and Eros were identified as containing several parcels of land that fell within the criteria of public open space within proximity of existing services infrastructure.

Rapid urbanisation as we see in Namibia, within a context of extreme inequality - in 2021 Namibia has the second highest GINI-coefficient index in the world,  inequitable urban land reform and exclusionary and non-sustainable market-driven housing processes, necessarily result in the kinds of conditions within which informal settlements proliferate as a means of affordable housing opportunities for low- and precarious income households, and professional middle-class households are increasingly excluded from the kinds of housing opportunities that foster upward social mobility and financial security. Based on the evidence we collect, we hope to develop the first draft of a context driven policy proposal that re-conceptualises  public housing as a public/social good with co-benefits for wider sustainable and equitable socio-economic development, land reform and environmental protection. Drawing on prior research on affordability and need, we also hope to include proposals for an expanded model of public housing opportunities for, starter-, low- and middle-income households, drawing on models of public housing development and administration processes in Singapore.

This project is an ILMI Seed Grant 2020 Awardee. For more infomation about the projectes, see: http://ilmi.nust.na/seed-grants-2020-awardees